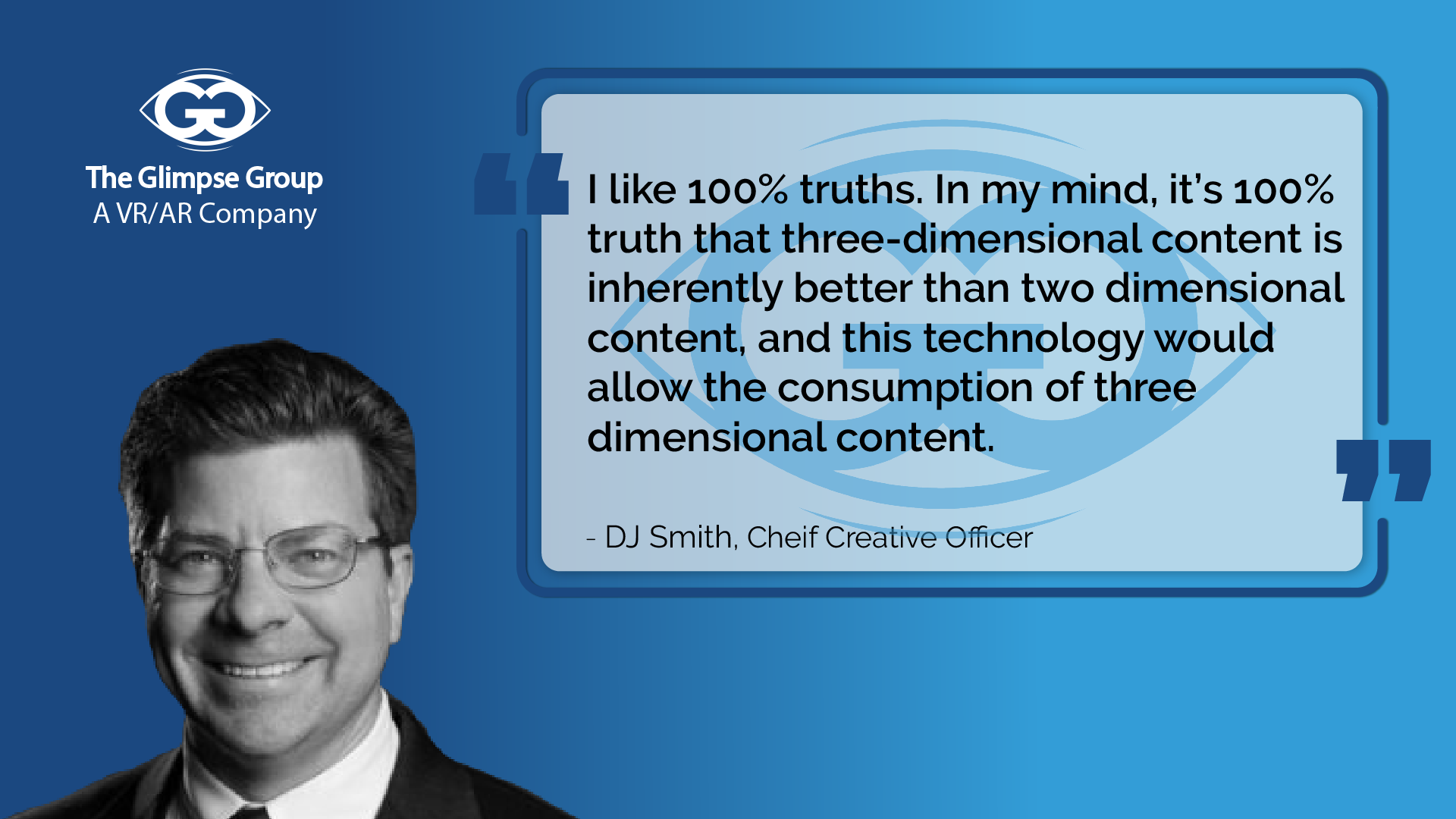 Defining the Augmented and Virtual Reality space as one just for techies rules out all of the fascinated onlookers peering from the windows of their non-tech industries. One of them would have been co-founder and Chief Creative Officer DJ Smith of The Glimpse Group.

This week, Glimpser spotlight emphasizes how VR and AR tech means something different to each person through DJ’s story of transition from engineering and construction to XR.

Selena: You’ve talked before about your pre-VR career being in construction and engineering until you came across VR/AR tech. That’s quite a career jump-and quite an interesting one. Have you always had a passion for technology or storytelling, or is this a coincidental encounter?

DJ: As a kid, and as I grew up, I built buildings. But in the background, I was always interested in arts, so playing music and painting and drawing. So when I was a kid, I saved my summer job money, and I bought what is old style projectors with the three big lights. And I connected that to my video games and that was my VR before VR. Then I got a couple of different projectors that rolled on and used to play like snowboarding games on the first PlayStation. So when I saw the first prototype of the Oculus Rift, I just immediately was like, “Oh, this is what I’ve been waiting for,” and immediately just started reading as much as I could on it.

Then the actual founder of the NY VR had posted that there was going to be a meetup. I thought, “I’ve been obsessed about this technology for a few weeks, I’m going to see what it’s about.” Then right after that first event, he said, “I could use some help organizing this thing,” so I jumped on board. Then he switched into a different thing and moved away, so I’ve been actually kind of running it for the past five, six years. I’ve been doing it solely.

DJ: It’s more of a gathering place, and if we found somebody that was working in the space, we’d ask them to present and share what they’d do.

As time rolled on, its popularity grew and grew and grew. We started charging about $5 because a lot of no- shows would happen, and that bumped our attendance rate to about 90%. I would pick themes for each month, so one month, I would have a bunch of people that are doing VR healthcare, and then another month, I would do motion capture, then another, eSports. I kind of had a running list.

But then since COVID has happened, I haven’t held any events, and I can’t really bring myself to do virtual events. It just doesn’t feel right to do like a VR meetup in a Google Hangout.

Selena: How did you and Glimpse’s CEO, Lyron Bentovim, meet? How did you kick off Glimpse together?

There was a bunch of investment going into the technology, and the first consumer headsets were being launched.

“A lot of the start-ups I knew through the meetup were starting to make a little bit of money, so there were a lot of signs that I was seeing that showed it was probably the right time to make a move into the industry.”

So I gave my notice, and I had a couple of leads in the construction industry to help them out with VR things. A week after I gave my notice, Lyron and our other two co- founders were meeting and excited about VR and they needed somebody in the industry with knowledge. They saw me on stage and asked, “Would you mind if we buy bought you lunch? We have an idea.” And I was like, “You caught me at a good time. I just gave my notice a week ago.”

I started coming into the city, and meeting with investors and start-ups, and within a couple of months, we raised money and brought on our first team.

Selena: Which of your subsidiaries or specific VR/AR solutions are flourishing more now with COVID, and which are lagging behind?

DJ: I think the marketing focused ones have always been the low hanging fruit.

QReal is definitely very, very busy these days. Brands need to still tell their stories, and because they’re using AR, because it’s the new medium. It’s the new way to reach the millennials, and we’re really in a good position to help those brands out with telling their stories.

I would say the ones that are really having trouble…I would kind of group all of the VR stuff together. VR is still, I think, viewed as more in this experimental bucket as opposed to production ready. A lot of companies have really just turned off the experimental budget.

There are some entities that are trying to evolve, and VR is a solution for being remote, so we are excited and our pipeline is huge. We think that a bunch of this stuff is going to trigger, but it’s just tough now, I think across the board for companies, and where they actually spend their money.

Selena: You’re not just a leader because of your title. You’re managing a company in an emerging tech industry. Where does the conviction and confidence to invest your resources in such an industry come from?

DJ:I like 100% truths. When I find them, I dig my claws into them. In my mind, it’s 100% truth that three-dimensional content is inherently better than two dimensional content, and this technology would allow the consumption of three dimensional content. So at that point, it was just a matter of timing. “Am I coming in too early or too late?” Up until till now, it feels like we made the right move, although it has been a long four and a half years and the industry. It hasn’t done that exponential curve quite yet. But I think from day one till now, it’s been a pretty linear path upwards, and I don’t see that going away.

DJ: We are a family of visionaries.

Selena: Describe what the future will look like with VR/AR in one word/short phrase

It’s not often that you come across a person that everyone seems to like. Similarly, finding an industry appealing to people from a myriad of backgrounds is also hard to come by- however, not impossible. The AR and VR industry and its growth potential has compelled many to enter its doors, and welcomingly so. The result for DJ Smith? A pioneer of a start-up in XR tech anchored in a vision to shape a world of interconnectedness.

DJ Smith is the Co-founder and CCO of The Glimpse Group. If you’d like to talk business in the AR and VR space, feel free to contact DJ on LinkedIn.