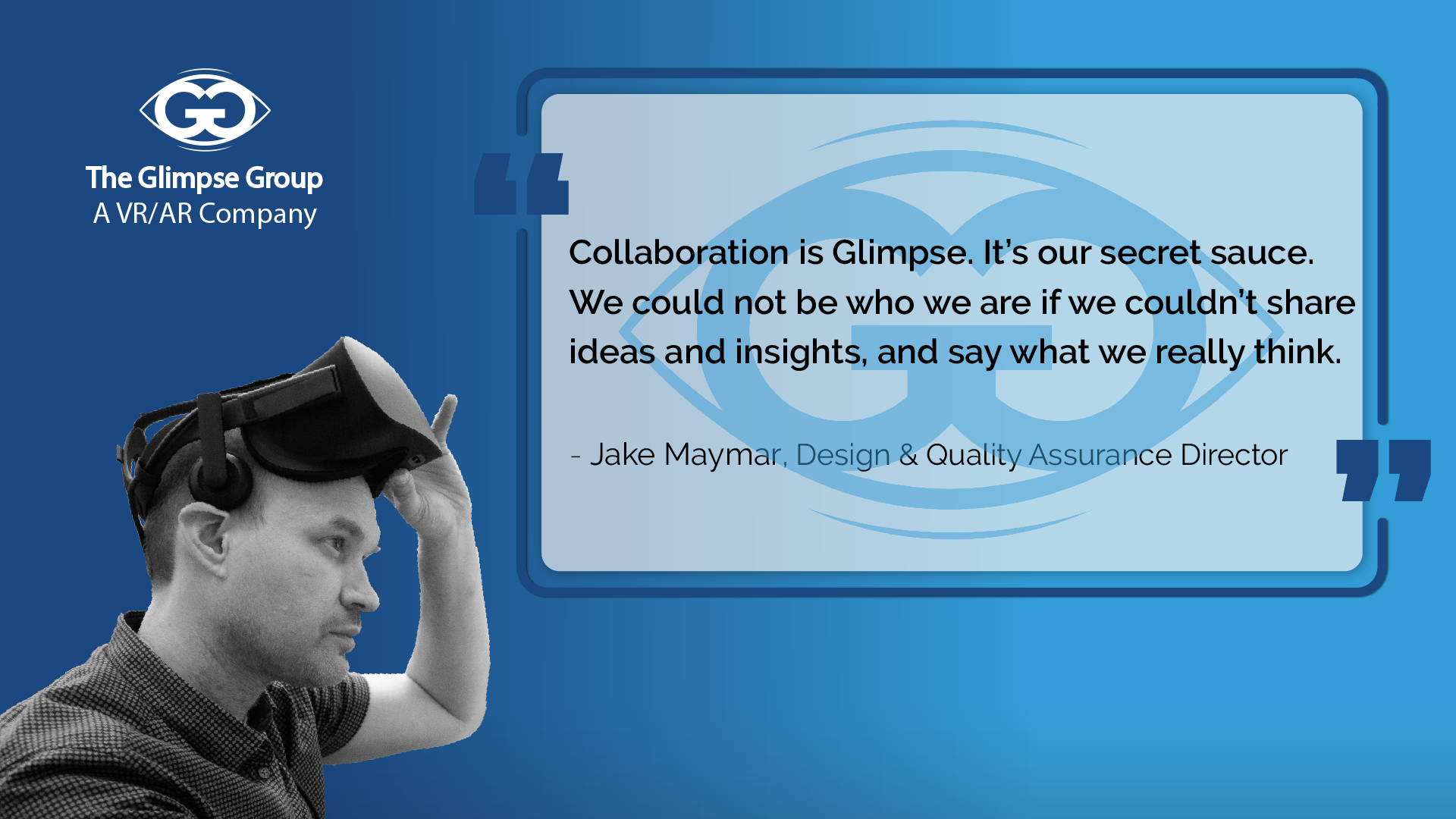 Selena: What do you do at Glimpse?

Jake:  I basically started as sort of a Glimpse consulting, but there’s also Foretell at the time. And basically, both those were focused on health and wellness and training. I built a whole bunch of projects with a whole bunch of different cross functional teams, and was basically director for all of these things. Then switched to Immersive Health Group and was directing that. I had different titles, but it was essentially doing the same thing. And now I’m director of Glimpse, so my role is quality as well as design.

Selena: Why do you believe in AR and VR technology?

Jake: I’ve always been a very visual person. I noticed very early on when I was creating these animations and the stories in these art installations that I could visualize it before it even existed. And I would get kind of frustrated because it’s like:

“If only you could see what I was thinking, and if only we could collaborate together to build this this world.”

I started researching all these different pipelines and how you can sort streamline this process, and I would rapidly prototype different ideas.

I’ve always been interested in data modeling, and data and patterns in general, and with AR, you can basically overlay all sorts of information on top of the real world, and be able to see specialized information- specifically context sensitive to that object. It’s incredibly valuable, and I think others see value in it as well.

VR was more for creation of worlds and experiences. It just seemed like a natural progression, where the next logical step was game design, app design, and then from there, VR. At the time, the hardware wasn’t really there yet. Not until basically this year did the hardware get to the point where I can actually finally start creating the things that I sort of envisioned.

Selena: How did you learn the technical part of AR & VR, and how are you utilizing it at Glimpse?

Jake:  At a young age, I had difficulty communicating, so it’s been one of my goals to be able to really communicate, and make sure that we’re all on the same page.

Something really fascinating that I discovered working at an advertising agency is we would all be talking about something and we’d all be really, really excited about it. But when I would actually start sketching it either in 3d or just on paper, it wasn’t even remotely close to what other people were sketching or creating in 3d. That’s actually what really drove me to really want to do VR, and that’s what we do now.

I get in with DJ [Smith, Glimpse co-founder], and we have this idea, where we go into the application, and we were trying to figure out, “What is the view?” So what we’re trying to do is, if you sit in the chair, how many people can you see? And if you turn around, how many can you see? And he basically sketched it out, and we sat in the chair, and we looked around, and it was like: “Oh, you can see basically 100 people, depending on where you sat.” So it’s very easy to very quickly rapid prototype. It’s this real time sort of problem solving to meet the needs of this mobile platform.

Selena: You lead agile teams in the execution of VR & AR builds, and you do that across all subsidiaries. That’s a lot of projects and people to manage. How are you keeping on top of everything, and how have you been maintaining collaboration with your teams in light of the corona virus?

Jake: Since I walked into the door of Glimpse, I kind of had a vision of what I wanted to Glimpse to be, and how I wanted to contribute to that. I wanted to streamline all the processes, make sure there was no redundancy and create a KPM so there’s a clear metric of success. And I wanted to foster communication with everyone.

Everyone at Glimpse had a different thing that they were really interested in, and really focused on. I would just go into those different groups in those different meetings, hear what they’re talking about, do my own research, contribute a little bit, and then make sure that everyone was communicating with everyone. Basically, fostering these groups and inspiring people by providing the umbrella. So basically, this group, I’ll just send you links, and you’ll send me links. And we’ll just keep communicating so you’re not missing out on anything, and you can now focus on what you want to focus on.

Jake. I think collaboration is Glimpse. It’s our secret sauce. We could not be who we are if we couldn’t share ideas and insights, and saying what we really think.

Selena: Describe what the future will look like with VR/AR in one word/short phrase

AR and VR is an industry heavily rooted in the what-could-be. Creativity is what this technology thrives off of, and the more brains put together, the wider the imagination potential. Ensuring this constant buzz of ideas within The Glimpse Group sounds as much fun as it is important for the company’s sustainability, and Jake Maymar is the guy making it happen.

Jake Maymar is the Director of Design and Quality Assurance at The Glimpse Group. For more information on what he’s up to (or for a chat about communications!), feel free to contact Jake on LinkedIn.