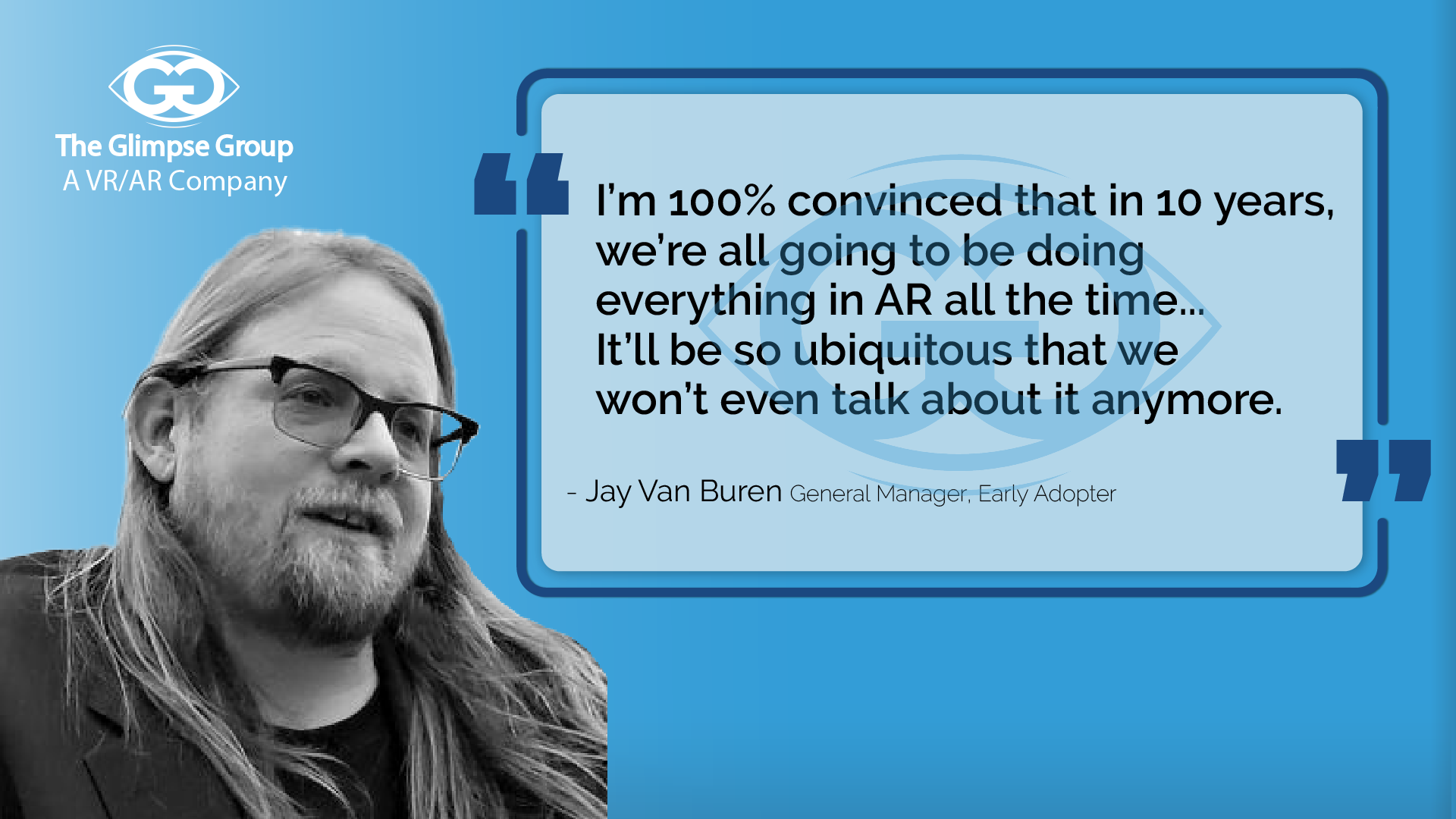 True to its name, Early Adopter is Glimpse’ subsidiary leading the way in ed-tech space by utilizing Augmented and Virtual reality to deliver outstandingly immersive experience for our students. Rooted in a fine arts background, founder Jay Van Buren is this week’s Glimpser, where he talks about the continuity of communication and its translation to the education using VR and AR tech.

Selena Jammaz: Tell us about your educational background.

Jay Van Buren: I’ve come to technology through a very unusual path. I started off as a fine artist, and I actually came to New York originally 24 years ago, to get my masters in painting at Parsons. And so I was studying painting. When I finished my master’s degree, I was looking for a way to pay the bills, and I started doing websites, and this was in the early days of the dot com bubble, when, at the time, if you knew how to make websites, you could get a job making websites. There was no such thing as having a degree in web design because that didn’t exist. It’s just like anyone who knew how to do it could do it.

Selena Jammaz: How did you get into augmented reality?

Jay Van Buren: Very quickly, I found that all those years using charcoal and paint and pencils totally did translate into a new medium. Ultimately, visual communication is still the same no matter what medium you’re using. It’s still line, it’s still shape, it’s still color. And so a lot of what I had learned in fine art was translatable into this new medium of the web, and just a segue into how I got into AR and VR. I think when I found out about augmented reality, the appeal for me was that it was it felt like, and still does feel like, the web felt in those early days. That is to say that it’s a brand-new medium. The rules have not been set yet. Nobody really knows what they’re doing, and we’re figuring it out. We’re all figuring it out as we go, which is fun. I just really like being on the frontier of technology, and that same thing is still true in AR, which is to say that communication is still and always will be about telling stories, about touching people’s hearts, about all those kinds of things. The human emotions are the same no matter what technology we’re using.

Selena Jammaz: When did Early Adopter come into the picture amidst this transition of communication and storytelling?

Jay Van Buren: So Early Adopter was- well I just started calling myself that. And there’s a funny story about that name, but I’ll tell it another time. Basically, for a long time, Early Adopter was just me. Then I started working with some other people, I started hiring some other people to help me and gradually grew into a small company. Then we started doing some augmented reality and virtual reality things, and then I found out about The Glimpse Group. It just really made sense to join with The Glimpse Group to help us to transition fully into AR VR, and in the last two years, we translated from being a company that was 70%, web to being over 90% AR and VR while actually growing our top line revenue.

Selena Jammaz: What do you think has been the biggest challenge that you’ve encountered this type of industry?

Jay Van Buren: It’s definitely that we are very, very early. And that’s a challenge. It’s a challenge that we’re all we’re all facing in this industry. I think that right now, none of our customers have a line item in their yearly budget that says, “Augmented Reality” or “Virtual Reality”. And so when you’re trying to sell something that nobody’s planned to buy, that’s always tough. You have to convince them that that they need it, when they haven’t needed it before. I think that’s biggest problem. It’s intimately tied to the biggest opportunity, which is that these things are gaining ground. They are going to gain ground. I’m 100% convinced that in 10 years, we’re all going to be doing everything in AR all the time, like we’ll be using AR as the primary interface for using our computers. It’ll be so ubiquitous that we won’t even talk about it anymore.

I always use the example like, you know these days, you don’t say to somebody, “I’m going to use a computer spreadsheet”, because, of course, it’s on a computer. In the same way, no one’s going to say, “Oh, I’m going to do XYZ in AR”, because of course it’s going to be an AR. How else could you do it?

Jay Van Buren: The first AR things that we did, we were building things on other people’s platforms, and they were very bespoke. So we were just doing one thing at a time, and it was extremely labor intensive. Now things are becoming systemized, and we can create experiences that other people can contribute to. For example, one of the things that we’re doing with Avenues [private school] (link to Avenues blog)is that the kids who are going to be doing the presentations about the clubs and sports, are actually going to just log in to our website, and they’re going to upload their assets into the system themselves. They’re going to be creating their presentations themselves. That’s pretty exciting, because it means that we’re democratizing the ability to create within this new medium, and I see that continuing and expanding tremendously in the coming year.

Selena Jammaz: What can you tell us about the Early Adopter AR learning suite?

Intrusive may very well be the word to describe ballooning AR/VR tech appearances across a breadth of industries. More prominently is its presence in education thanks to (or maybe not thanks to) the need COVID-19 has created for remote learning. Regardless of its cause, augmented and virtual teaching methods have finally hit the ground, are providing engaging learning experiences for our children, and are picking up traction with plans to stay wherever we find our students learning from.

Jay Van Buren is founder and CEO of Virtual and Augmented reality subsidiary, Early Adopter, of The Glimpse Group.  Want to keep up with the latest in the tech-industry?  Feel free to contact Jay on LinkedIn.