The myth is out: Gaining a competitive business edge is largely harnessed from listening and interacting with our current and prospective consumers. Plot twist: Augmented and Virtual Reality are changing the way we do it. Project Manager at Augmented and Virtual Reality company The Glimpse Group, Katelyn Coughlan, shares first hand experience working with brands to integrate young and growing  AR and VR tech into their communication strategies.

Selena Jammaz: Give us a brief background about yourself, in terms of your education and career, before becoming a part of The Glimpse Group.

Katelyn Coghlan: I got my Bachelor of Arts from Fairfield University in Connecticut, and I actually got it in film and television production, and I had a minor in marketing. When I was leaving school, I had intended to go ahead and start a career in film and television, which I did, and I worked in television for a couple of years before pivoting to emerging tech, which is where I’m at now.

Selena Jammaz: How has using AR and VR changed the way that companies are communicating their brands with consumers now with this whole new experience?

Katelyn Coghlan: I believe that VR and AR have completely changed the conversation that brands are having with their customers, simply because now you can actually bring the 3D world into the digital space. 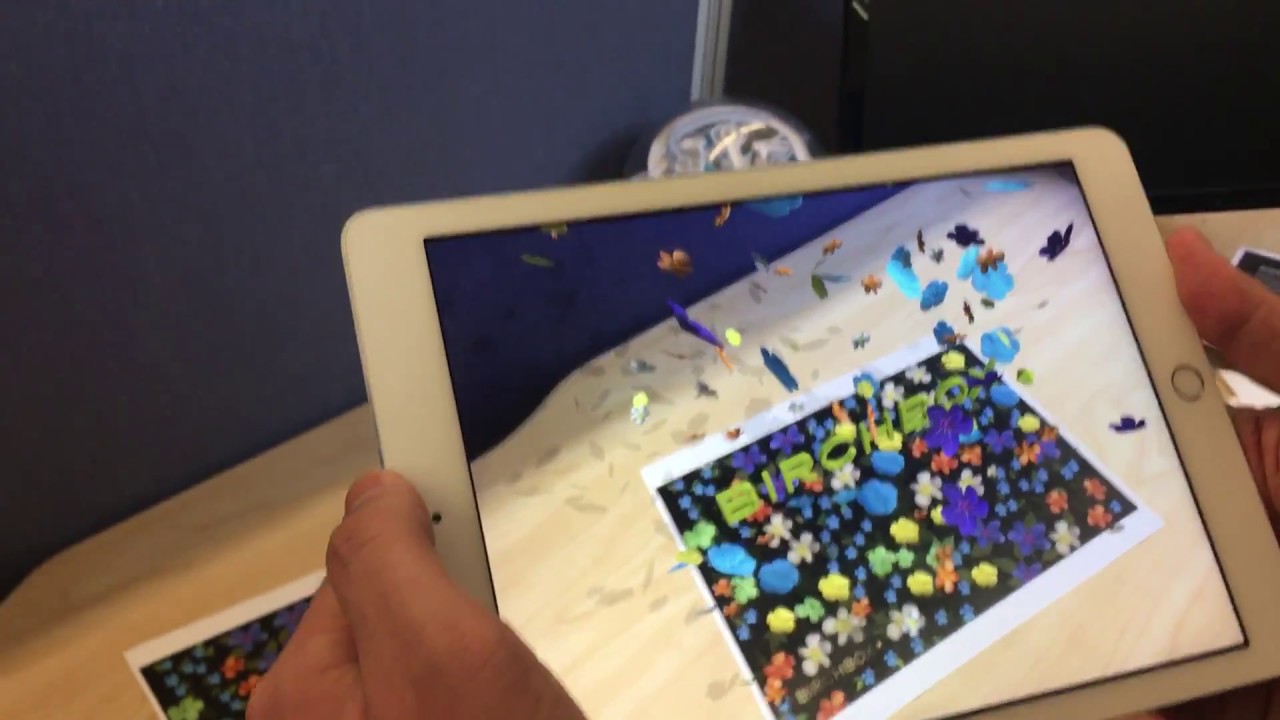 For so long, if you look at the history of advertising, visual advertising went from print to television, and then digital was the next new big platform. But I felt like, up until recently, the digital platform kind of plateaued. There was only so far you could take it. It was really just taking videos that you were originally doing exclusively cheap for TV and putting it on another platform, and it just wasn’t really taking advantage of what these machines with these phones can do, and really what the potential is, is beyond that. So I think virtual and augmented reality have really forced brands to reframe the way that they create advertising and the way that they create messaging, because people are looking for more personal tactile type of messaging. It just feels more authentic.

I think people have kind of gotten wind of the fact that in email chains, you’re one of 100,000 people that receive it. And although it’s true that you could be one of thousands seeing this VR and AR solution, the experience is unique to you. You can make from it, what you will, and the brands are just giving you the tools to do that, which is really cool. It brings in an element of personality to brands and their products.

Selena Jammaz: Youmentioned that this is forcing companies to kind of go in this direction. Do you think eventually, using AR and VR is going to be the common denominator for all brands.

Katelyn Coghlan:Since VR and AR are taking such a step forward in these months, I do believe that it may not be a common denominator, but it’s at least a new platform that people are gravitating towards and curious enough in a way that brands need to seriously address it. I think that what these technologies are going to do is reframe how we consume content. I don’t believe that the way that VR and AR are right now is going to be the long-term future. I think that there’s going to be a convergence of the two technologies, and that a lot of this stuff is going to become hands free. This is really the first step in a big evolution of how content everywhere is seen and consumed and interacted with.

Selena Jammaz: At point did you come in contact with VR and AR, and realize that this is the direction that we’re going towards in marketing and advertising?

Katelyn Coghlan: So I was at Viacom. I was actually working on some emerging tech projects, but they weren’t super well-funded because it was so new. This was probably back in 2015/2016. It was right at the start of when these things were really hitting the market, and I found them very interesting- more interesting than linear television. And I just saw the writing on the wall. I saw that streaming was eclipsing cable. I saw that screen time on phones and iPads was eclipsing screen time on traditional television monitors. I just saw that the next generation and the way that the world is moving is that more people were going to be moving away from this traditional media that I had been working in and moving towards something else.

I realized really quickly that if I wanted to, first of all future proof my career and never be out of work, but also stay ahead of the curve, I needed to find another environment to work in. Just because I wanted something a bit more exciting. And also, like I said, a bit more future proof.

It’s really great to be in an industry that’s emerging now at this point, because I feel like I’m able to watch it grow, and I’m able to influence how it grows. I’m not really sure where this is going to take me, or where the industry is going to go. I think that’s part of the ride. It’s an exciting place to be.

Selena Jammaz: Drawing on your experience, what type of companies have been the most excited to use this type of technology for their branding, as opposed to some that are still hesitant?

Katelyn Coghlan: It’s hard to classify one type of company as the type of company that’s going to adopt VR and AR over others, because I think everybody has a different motivation to adopt. I have some brands that skew older that want to skew younger, and they see this as an opportunity to really get into those younger audiences and appeal to those younger generations. I think that there’s other brands that are heavily rooted in the Gen Z culture, and they’re expecting these things to be commonplace. So it’s two different brands asking for the same things for different reasons, and that really comes out in the type of experience that they ask

I think the biggest commonality that I see between all these different types of brands is that there are brands who understand that they need to evolve to stay relevant and stay in business indefinitely, and there are brands that feel confident that they don’t need to evolve, because they are that strong. And while it can be very easy to get lulled into a sense of security when you’re the big guy on top, eventually the other shoe is going to drop if you don’t stay with the times. So I have a lot of admiration for brands who take a risk, and I have a lot of emotion for brands who invest appropriate amounts of money into growth in this area. And I think that brands who aren’t, are really going to feel it in a couple of years.

Selena Jammaz: What do you think is the biggest uncertainty that are keeping those hesitant brands from making the jump into the AR and VR industry?

Katelyn Coghlan: I would say that the biggest uncertainty that brands have is, “Am I actually going to get a return on my investment?” AR and VR is not a line item that exists on a 2021 budget sheet. It’s usually slotted into a marketing or innovation budget, so I think that there’s a lot of people that fear adoption because there isn’t a clear line item to attach this to. I think when they see that they have to pull money from somewhere else to take this risk, they’re very concerned about, “What’s the return on this investment? What am I going to get?”

I do think that brands who hold their breath and take a plunge are satisfied because they see people engaging with it more than they realize. And I think that’s what brands need to understand. You will get lower impressions on your VR and AR experience from a number standpoint, but the quality of that impression is far greater, and I think that is the biggest disconnect that brands have right now. That’s really the root of their hesitation.

But brands who do take the plunge usually are pleasantly surprised, because they will see not only anecdotally that people are engaging with it and much more excited about it, but it will also appear in any analytics that we provide.

Katelyn Coghlan: It has been a wild ride, to say the least. I’ve gotten to work with all different types of people, both internally and externally as clients. I’ve been able to be introduced to a whole bunch of different industries, some that I didn’t even know existed, some that I had interest in, but never had an avenue to explore. And it’s really nice to be able to see all these opportunities and have the freedom to sculpt them and design them, and work with a team to make them come to fruition. I just think it’s incredible, the growth that the company has been able to see over the years. I remember when it was seven people in an office on the Upper East Side, and now it’s this 40 person, strong company that’s got all these really prestigious clients and turning out really impressive work. It’s been a pleasure to watch the evolution of not only the company, but also myself, just because I’ve been exposed to so many things I wouldn’t have otherwise been exposed to.

Selena Jammaz: In one word, what does it mean to be a Glimpser?

Selena Jammaz: In one word, what is AR and VR’s place in the future?

Visionaries like Katelyn Coghlan realize that AR and VR tech aren’t merely making a special appearance. They’re now the catalysts that’ll enhance the way businesses engage with their customers. The differentiating factor that has redefined what it means to be ahead in the business world. Those that catch on early and invest in working with Glimpsers like Katelyn will find themselves ahead of the game when VR and AR truly become commonplace.

Katelyn Coughlan is the lead Project Manager at The Glimpse Group. For up-to-dates on what VR/AR projects Katelyn is working on,  feel free to contact Katelyn on LinkedIn.