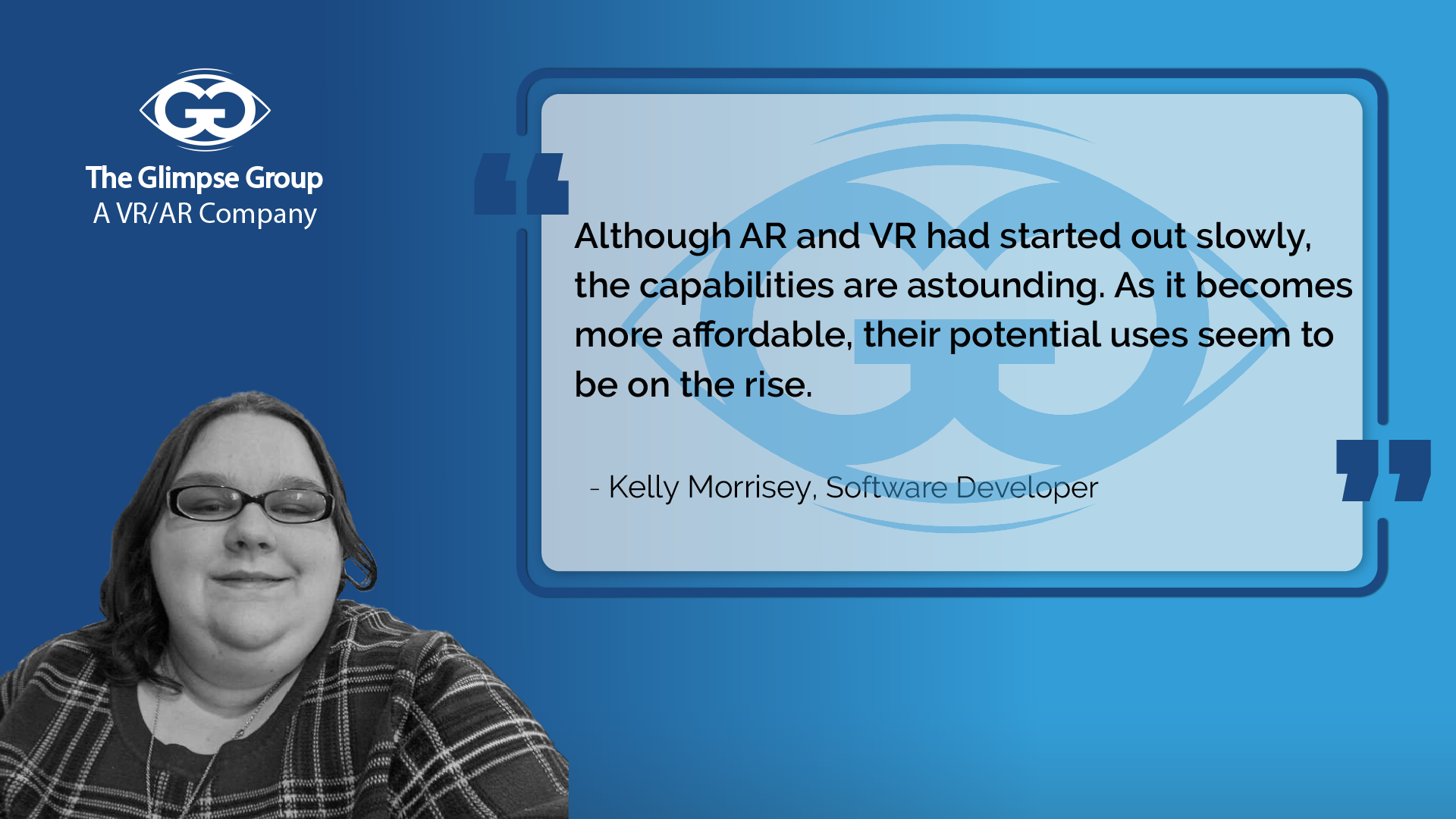 Coming across the Augmented and Virtual Reality industry is a treasure for developers looking to extend their conceptual potentials. Glimpser Kelly Morrissey outlines her shift to XR at The Glimpse Group from a game programming background.

Selena: Tell me about yourself in terms of education and career progression.

Kelly: I went to college at Champlain College for game programming. After graduating, I worked at Bank of America through a contract company. Once that contract ended, I started applying to companies that were doing things more in line with my degree. Then I found and applied to Glimpse.

Selena:  How did you come across Glimpse, and how do you divide your time amongst the subsidiaries?

Kelly: I was searching for a new opportunity, and found one of the listings. I’d applied twice, actually. The first time for an Unreal position and unfortunately had to turn the chance down to work here at The Glimpse Group because of a contract I was under.

I work for Glimpse as part of a general crew, and have my time divided by Katelyn and Brennan based on which subsidiary needs the most help. Although, with the recent changes, I’m working more on the general project of setting up a single project to branch off of in the future.

Selena:  Why do you believe in AR and VR technology?

“Although AR and VR had started out slowly, the capabilities are astounding. As it becomes more affordable, their potential uses seem to be on the rise. Of course, it has a place in games, but Glimpse shows how it can be used for training, meetings, architect planning and more.”

Selena: How do you know that what you’re developing is what the user is looking for before they even know what they’re looking for?

Kelly:  Honestly when it comes to development, sometimes all you need is an idea to get started. It’s hard for someone who hasn’t had a lot of experience with VR or development to even guess what they actually want to see or experience. Taking an idea and running with it creates a better experience for everyone since it gives the developer and the user time to figure out the specifics. The main part is always building a basic version of their request and adding what definitely has to be there for a good experience.

Selena: Describe what the future will look like with VR/AR in one word/short phrase.

To get in touch with Kelly and inquire about AR/VR development, feel free to reach out through LinkedIn.