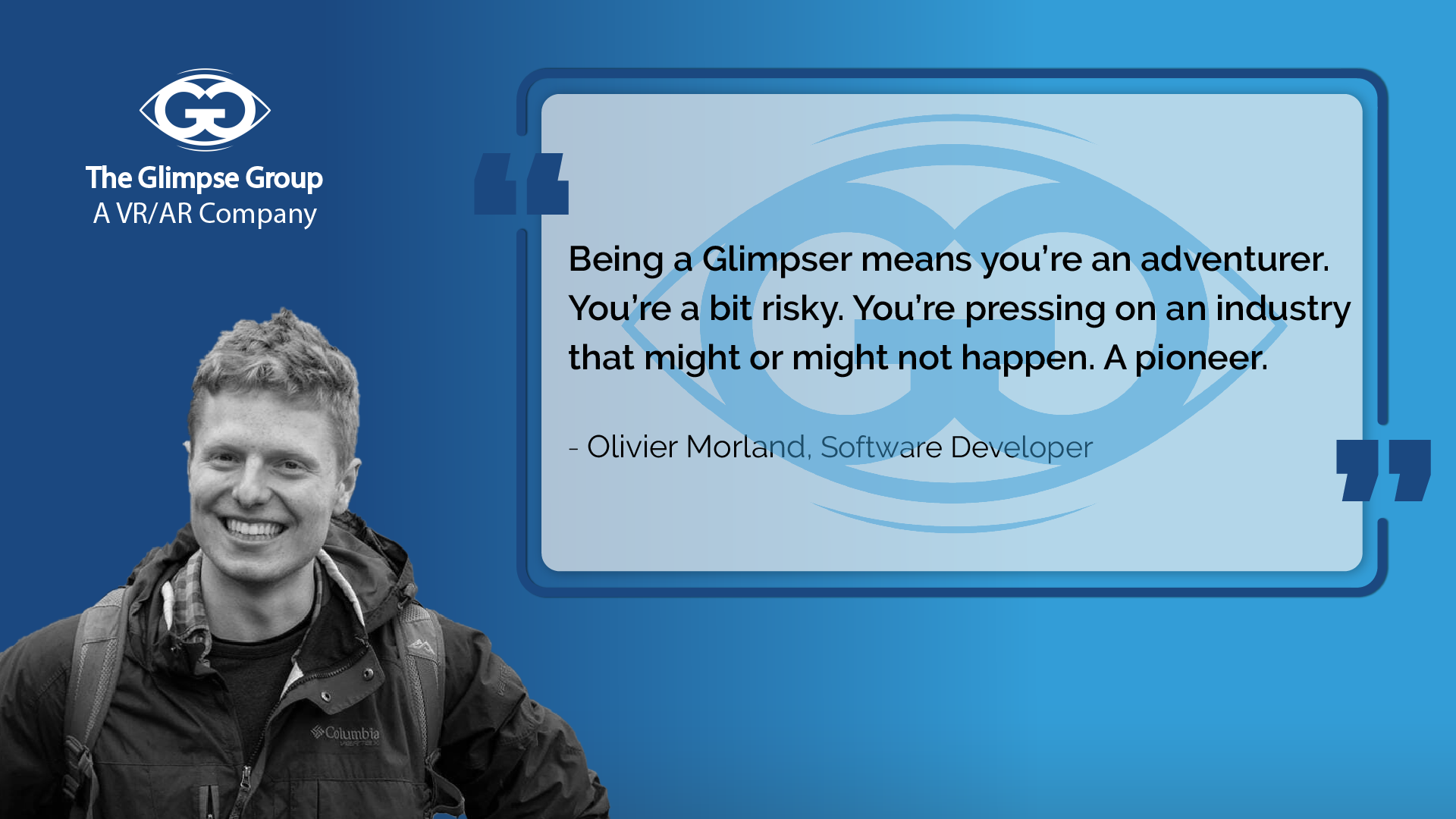 After first trying in England, he carried his interest to New York and followed fate through Glimpse’ doors. Oliver Morland outlines his journey from electrical engineer to Virtual and Augmented Reality developer at Glimpse in this week’s Glimpser Spotlight.

Selena: Give us a brief background about yourself in terms of education.

Oliver: I went to the University of Sheffield, which is in the Midlands of England. Sheffield is probably quite comparable to Pittsburgh in the USA. It’s an industrial city, which really tanked in the 80s, but it’s kind of coming back with high end manufacturing. And that’s all thanks to the university though, which has a very good reputation for engineering. And that is what I studied. Electrical engineering. And I was bored to tears.

Selena: How did you learn about the VR and AR space?

Oliver: Before I got to university, I had a summer job, and it was a job at a company that instilled very, very expensive home cinemas into very, very rich people’s houses. And my boss was very forward thinking. He was interested in virtual reality, back then the HTC Vive had just come out. It was a newest coolest VR thing.

So he bought one. One day he came in and said, “Hey, guys, I’ve got the coolest thing. Come to my house.” So we all went over to his lovely house, and there on the floor was this little black thing. The HTC Vive. And I was blown away. And I was wanting to get developing on it, but I never really had the time until the final year project where we could sort of choose what we wanted to do. I begged my professors. I was like, “Can I do something virtual reality?” And so I did, and I got a bit of experience, and that’s how I got into virtual reality.

Selena:How did you make your way to Glimpse?

Oliver: How did I get the job at Glimpse? Yeah, I ran away from England after my degree.

I got on the flight and landed, and then it was a bit of a “What now?” situation. I got myself a job at a British restaurant actually serving tea and crumpets. And around that time, I met a guy called Chris. There was this meetup that was happening around Bryant Park, and so I was like, “Oh, virtual reality education. I’m interested in that.”

Selena: Now that you’re at Glimpse, tell me what you do exactly.

Selena: I imagine being an AR and VR complicated. Is that the case?

Oliver: It’s not really. The history of programming, since it started, has been a case of not reinventing the wheel. The people who first started programming packaged up what they made into a library, and the next people packaged many libraries, and then many libraries. And so you ended up reusing stuff that other people have built.

The problem with reusing other people’s stuff is that, you can create projects that aren’t very flexible, because you’re dependent on the work that people have done.

Selena: Which subsidiaries do you work for, or do you jump around?

Oliver: I used to work for Early Adopter, but Glimpse has recently restructured in order not to have each sub reinventing the wheel each time. They’ve bunched a lot of the developers together to create a sort of package of codes that will help for all the projects that we’re doing. The idea is that it will take less time and less effort to build new projects each time.

Selena: What’s it been like working during the COVID-19 pandemic?

Oliver: Work is a lot harder, because it’s harder to talk to people. Before, the fact that you’re working with other people kind of motivated your work. But there’s advantages as well.  No commute to work, an in New York, the commute could be pretty painful. And you don’t spend your time buying overpriced lunches at the local cafe. Instead, you can cook your own food. So I’d say at a quality of life point of view. It’s better. From a work point of view, it’s worse.

Selena: What does it mean to be a Glimpser?

Oliver: Being a Glimpser means you’re an adventurer. You’re a bit risky. You’re pressing on an industry that might or might now happen. A pioneer.

Selena:What does the future look like with AR and VR?

Oliver: Nobody knows. However, Virtual Reality is useful in some respects. Firstly, for games. Games in VR are awesome. It also doubles as a good training tool. Athletics. A use for specialized tasks.

In line with the uniqueness of Glimpse’ identity, Oliver’s atypical story of school to cross-border work spotlights just how diversified our Glimpers’ backgrounds truly are.